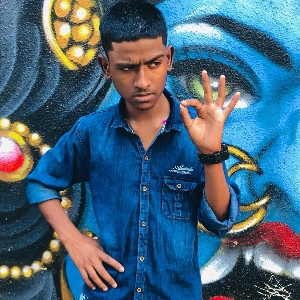 Rupesh Dewasi (Superstar Dewasi) was born in Kota, Rajasthan on 14th January 2005 in a very lower-middle-class Hindu family. He is just 16 year old but now his life is changing day by day.

Rupesh Dewasi (Superstar Dewasi) is a famous Instagram star who gained lots of fan following on Instagram after his one viral video. He just lip-syncs on a Radio City Song and became most popular on social media.

His current Instagram followers are above 2 million which is too huge what you guys think about him please comment below and in this post, I will show the Complete biography and life journey of superstar Dewasi.

He also spends lots of time making tiktok video where he had more than 6.3 million followers but as we know tiktok banned in India then he joins Instagram and became popular.

Rupesh Dewasi career is just started and now he gets much more support from the desi music factory company.

After he joins that’s the company to managing his Instagram account he collaborated with many famous influencer and Singer like Riyaz Aly, 𝐑𝐨𝐡𝐢𝐭 𝐙𝐢𝐧𝐣𝐮𝐫𝐤𝐞, Tony Kakkar, Anshul Garg, honey Singh and more.

Riyaz and 𝐑𝐨𝐡𝐢𝐭 𝐙𝐢𝐧𝐣𝐮𝐫𝐤𝐞 make many videos with him for just support.

1. He gained more than 2 million Instagram followers in a very short period of time and more than 6.3 Million TikTok fans.

3. He belongs to a small village in Kota.

4. He is also a dancer and social media star.

5. He calls himself the name Taklu Baadshah.

6. His popular name is “Superstar Dewasi”.

8. His lip sync skill is awesome that’s why he became popular on Instagram through his reels video.