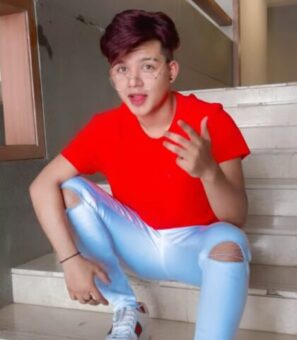 Riyaz Aly is a young actor and influencer who has gained lots of popularity through Instagram and tiktok. He was born on 14th September 2003 in Jaigaun, Bhutan and his age is just 17 years.

He did his schooling from Dharamshala and the school name is Shri Hanuman Mandir School and Now, he is studying in class 12th.

Riyaz Aly always posts pics on social media with his family. He belongs to a Muslim family and surname name is Aly.

Riyaz Aly does not have girlfriend but rumours and many time has seen hanging out with TV actress Avneet Kaur.

Riyaz has also collaborated with Avneet couple of times and fans love their cute chemistry.

Riyaz started his career in the year 2017. He used to make TikTok videos and slowly he got famous through TikTok then he joined the Instagram same year.

He also collaborated with other TikTok stars like Mr Faisu, Team 07, Junaid Malik and many more but he always mentioned that he is inspired by Danish Zehen.

Riyaz Aly daily shares stylish photos, Lipsync video and Reels of him on Instagram. He has 11.3 million followers on Instagram as 07 January 2021.

Every year gave a tribute to late Danish Zehen on 20 December and also mentioned that without Danish, it would not be possible for him to become successful.

Riyaz Aly does not make his own YouTube channel but he has collaborated with Desi Music Factory youtube channel where He has featured in music videos including 1 AM, Chocolate, Gucci, Pahadan, Superstar, Daily daily, Yaari hai and Naagin jaisi.

He collaborated with many famous singer like Tony Kakkar, Neha Kakkar, Aroob Khan, Rajat nagpal and others for the song Naagin Jaisi and Chocolate Song.

Riyaz Aly most-watched video song on YouTube is Yaari hai and Superstar which is sung by Tony Kakkar and Neha Kakkar also features Siddharth Nigam and Anushka Sen. Both videos has over 240 million+ views and 2.5 million+ likes on YouTube.

Riyaz Aly started making vlip-sync videos on TikTok and he didn’t know how much people like his videos. After getting lots of love from fans on his comedy and stylish videos he became crowned muser on TikTok.

He has received over 43.7 million fans and 2.1 billion likes as of 07 January 2020. He has collaborated with many celebrities and television actor.

Riyaz has collabed with Ashnoor Kaur and made TikTok video that went viral. Then he worked with Indian TV actress Anushka Sen and featured together in the song Superstar sung by Neha Kakkar.

He also counted in the list of top 5 most followed celebrities on TikTok but unfortunately tiktok banned in india.

As per online source and reports, his total income is between ₹2 -₹5 crore and he often charges a huge amount. Dgital brand desi music factory managed Riyaz’s Advertisement and instagram.

Riyaz aly loves acting, dancing and modelling. He discovered his passion at a young age and started follow to his passion.

Now he is completely focused on his career and wants to do acting in bollywood movies.