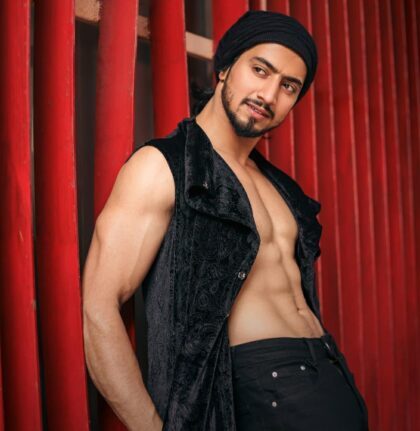 Faisal Shaikh Aka Mr Faisu is a popular TikTok star, actor, model and social media influencer. He is famous for making lip-sync videos on TikTok and now he becomes more popular for his web series Bang Baang.

Faisal was born into a middle class muslim family who lives with his parents in Mumbai and two sisters.

There were rumours that he is dating the famous tiktok queen Jannat Zubair, but later, they said we are just friend.

Reportedly, he is currently dating Bang Baang Web Series co-actor Ruhi Singh. But in a recent interview with RJ Sid Kannan, they said we are friends.

Mr. Faisu started his career by making TikTok videos with his close friend’s group and the group
named as Team 07, which consisted of the five members including Faisal Shaikh, Shadan Farooqui, Hasnain Khan, Faiz Baloch, and Adnaan Shaikh.

Mr Faisu started making videos on Dub Smash, then musically app, Later musically changed as TikTok. He got only 600 likes on his first video.

Then he continued making videos and got viral with his TikTok videos also makes 11-12 videos every day on TikTok. He has 30 millions+ fans on TikTok account.

Faisu is one of the most popular TikTok stars in India and under 10th rank in the world. He has more than 16 million followers on Instagram.

Mr Faisu has done many songs video with big companies like T Series, United white flag, desi music factory and zee music company. Below given all his music video lists.

Mr Faisu landed into a big controversy when Faisu and other members of Team 07 group uploaded a video on TikTok and Instagram based on the lynching of Tabrez in 2019.

They said that “Innocent Tabrez was killed, but if Tabrez’s son grows up and takes revenge then Muslims shouldn’t be termed as terrorists.”

After viral that Video they were criticised for creating hatred and the Shiv Sena activist Ramesh Solanki filed an FIR against Team07.

Then Tiktok india banned accounts of the three members of Team 07.

Tiktok Explained why those accounts are banned “TikTok has zero-tolerance for content that incites violence against other users or any content that violates its Community Guidelines. In line with this, the video in question, which has violated our Community Guidelines, is no longer available on TikTok. Such irresponsible acts will not be tolerated on our platform, hence we have suspended three user accounts and are cooperating with law enforcement agencies. The three user accounts belonged to Hasnain Khan, Faisal Shaikh and Sadhan Farooqui.”

For this mistakes, Mr Faisu and his team uploaded a story on their Instagram account apologising for hurting the sentiments of the people.

Unfortunately, Mr Faisu again landed on controversy for an allegation of a made phone call on Youtuber carry minati and said don’t make roasting video on Mr Faisu.

Carry Minati explain this on him “The End” video of youtube vs tiktok, After Carry Minati video Mr Faisu got too much hated from Carry Army.

And then Faisu explain he never call anybody for this thing and posted on Instagram.

He is a young influencer who launched own brand of deodorant ‘2407 Crush’.

His hobbies is travelling, dancing and spending time with his friends.

He is most popular in his social media life as Mr Faisu.

In his college life he used to perform bike stunts with the members of his group.

He worked in a deodorant shop as a salesman for his pocket money.

His first live event with the other members of Team 07 was in Ahmedabad, Gujarat.

He spend almost 2 hours in the gym for daily workouts and be fitness freak.

He smoking Hukka in parties and bar.

Mr Faisu is selected for a web series which is very difficult to get for any artists. He becomes the hero who starts his journey from Mumbai slum Dharavi.

He is such an inspiration of many people’s so what you guys think about Mr Faisu please comment below.