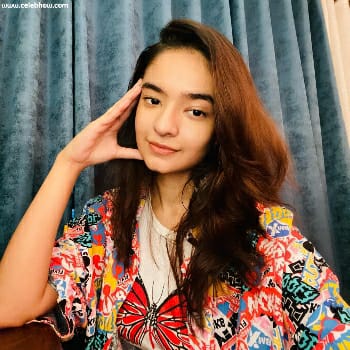 Anushka Sen is a famous TV Actress and Social Media Star who was born on 04 August 2002 in Ranchi, Jharkhand, India. She played role in tv drama Baal Veer and Jhansi Ki Rani.

Anushka’s age as 2021 is 19 years old and she is pursuing a degree in filmography at Thakur College of Science and Commerce, Mumbai, and completed schooling at Ryan International School, Mumbai. She is short height girl 5 feet 3 inches.

She did a web series in 2021 named Crashh Season 1 produced by Alt Balaji and Zee5 where her character name is Alia and soon she will be shoot for the Crashh season 2.

She appeared in many music videos with famous stars like Siddharth Nigam, Darsheel Safary, and Riyaz aly.

Anushka is a short height girl but her looks can impress anybody very instant. she is 5 feet 2 inches and approx weight is 40 kg.

As a rumor, she is in a relationship with famous TikTok star Riyaz Aly or Siddharth Nigam but it’s not confirmed ever from the side of Anushka that riyaz or Siddharth is her boyfriend.

She is the only daughter of her parents who lives with her family in Mumbai. Her father’s name is Anirban sen and her mother is Rajrupa sen and she sometimes talking in the Bengali language.

She is pursuing a degree in filmography at Thakur College of Science and Commerce, Mumbai, and completed schooling at Ryan International School, Mumbai.

She has more than 19 million Instagram followers at the age of 19. Also, she is most popular on YouTube with more than 2 million subscribers.

Anushka Sen’s an actor as a profession, Dance is her passion, Movies, TVC, TV Shows and Travelling all part of Globe is her wish. keep support and love her for motivation and here is Some information about her, what you guys think please comments below.

If you find any wrong information related to her please let me know we will make that correct after researching.